In cooperation with »Sunny Side of the Doc« EURASF presented the »European Talent Hub for Science Media« which took place end of June in La Rochelle, France.
by Thilo Körkel

At the 2019 edition of one of the biggest international documentary markets, Sunny Side of the Doc, the organizers’ spotlight was on the finest science storytellers. So it was quite natural for the European Academy of Science Film, EURASF, to team up with Sunny Side. In a common effort, co-developed by international consultant and former commissioning editor of ARTE France, Christine Reisen, they set up a »European Talent Hub for Science Media« at the event location in the French City of La Rochelle at the Atlantic coast.

Christine Reisen, who is a board member of EURASF, produced and moderated the session. Nine film makers out of seven countries presented former works and their next big projects to come. The participants came from Italy, United Kingdom, Poland, Hungary, the Netherlands, France and Spain and had been selected by Wolfgang Haberl, chairman of EURASF, by Patrizia Mancini, Sunny Side international development executive, and by Reisen herself.

The pool of talents was big. EURASF had invited its individual members to submit their applications. Additionally EURASF member festivals such as INSCIENCE or PARISCIENCE had been asked to suggest up to two candidates having participated in their incubating actions. Further finalists were picked at CAMP4SCIENCE, a week-long training workshop during the AFO festival in the Czech Republic.

Great documentaries are awaiting us. Take Balazs Lerner, hungarian anthropologist and professional cave diver. He currently is part of an investigation to find remaining copies of the first atlas of anatomy, published by 16th-century Flemish anatomist Andreas Vesalius. To what end? For more than 300 years this atlas contained the most correct anatomic information available, and many scientists worked through it. Since many of them left handwritten notes on the pages, these annotated copies will give an exquisite insight into the development of anatomic knowledge. Lerner’s starting point is an enthusiastic collector, who already owns seven copies. (»Sex, Scalpels & Sketches: On the Fabric of the Human Body«)

Equally intriguing: Marleine van der Werfs project »The Living Dead«. The Rotterdam based Dutch-Suisse film maker tells the stories of people who feel that they don’t exist, suffering from a mental disorder called Cotard delusion. Van der Werf is conceiving an installation which uses wearables, sound, smell and virtual reality to immerse viewers in her story and to let them come close to out-of-body-experiences. (»The Living Dead«)

British filmmaker Mike Paterson presented »Elemental«, a collaborative filmmaking project that explores by compelling stories how closely each of the elements of the periodic table is connected to human life. (»Elemental«)

Check out this page to find out more about the selected »European Talents«, about their biographies and their plans for the future.

All participants received a bursary for travel and accomodation costs as well as a free accreditation to the market, thanks to the event’s three sponsors: Sunny Side of the Doc, CNRS Images, the audiovisual arm of the French National Center for Scientific Research, which is among the biggest research organizations in the world, and KissKissBankBank, the European crowdfunding platform for creative, social and entrepreneurial projects.

Also present: Nicolas Baker, chief editor multimedia at CNRS Images, who is heading the video activities of CNRS. Interestingly, as he stated in his introducing words, CNRS not only publishes short length films on its news websites (in French and in English), and on the CNRS' two Youtube Channels (CNRS and Zeste de Science) but also aims at coproducing science media and cofinancing independent producers.

Also present: Nicolas Baker, chief editor multimedia at CNRS Images, who is heading the video activities of CNRS. Interestingly, as he stated in his introducing words, CNRS not only publishes short length films on lejournal.cnrs.fr and on the CNRS Youtube Channel, but also aims at coproducing science media and cofinancing independent producers. 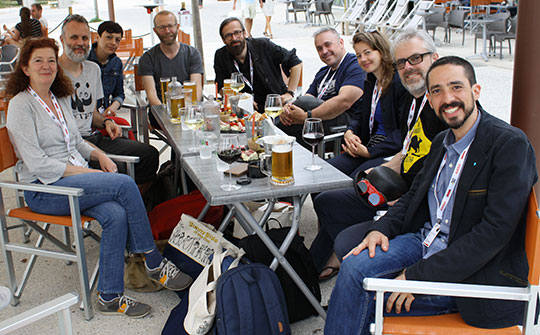