Chosen for SF-AiD program of EURASF in March 2018
“Science in Exile” (37 minutes; 2017), directed by Nicole Leghissa, produced by The World Academy of Sciences (TWAS) for Advancement of Science in Developing Countries

Comment by the Jury
One insight, given at the very beginning of this documentary, does not come as a surprise: scientists are especially endangered by authoritarian regimes, even more if their country is at war. They are attractive targets for ruling parties terrorizing their people. If a regime succeeds in intimidating a leading professor of a scientific discipline, it intimidates a whole community. If a regime succeeds in driving scientists out of the hospital where they are working, it destroys medical infrastructure and development for thousands of people. There exists a further reason, not explicitly mentioned in the film, which is conveyed only by the voices of its protagonists: well-educated people with access to international communities are a potent threat to authoritarian rulers.

“Science in Exile” not only deals with the wars of our time; it also addresses the crisis of science, which is no longer broadly considered a tool for emancipation and progress, but increasingly taken prisoner by economic and political actors and even by warring parties.

Italian filmmaker Nicole Leghissa portrays four scientists, men and women, from Syriah, Irak and Yemen, who made their way out, to Lebanon, Germany, Italy or, momentarily, Sudan. They are among the lucky ones, those who were well received by universities, foundations, individual researchers concerned enough to help, international organizations like the New York based Institute of International Education with its Scholar Rescue Fund, or the Alexander von Humboldt Foundation in Bonn, Germany, with its Philipp Schwartz-Initiative to help threatened academics.

Nevertheless, many of Leghissa’s calm pictures reflect the solitude of those who involuntarily live far from home as well as the desperation of those who dwell in refugee camps only a stone's throw away from their homeland.

This experienced filmmaker, with an academic background in diplomatic and international Sciences, does not tell a story, not even episodes, but gives snapshots of people left behind – lost – their home and families, perhaps regaining some hope now, while still being afraid of the unknown future. Their collective and simple wish: a safe haven, reunion with their families and the opportunity to continue their work and research.

Quite naturally, scientist refugees do not differ much from non-scientist ones. However, their impact could: their work might make a huge difference for their countries, maybe even for the world as a whole.

Premiering at the World Science Forum in Jordan in November 2017, “Science in Exile” was produced by TWAS, The World Academy of Sciences for Advancement of Science in Developing Countries. It can be seen as an invitation, even a demand, to support threatened scientists the best we can. And it gives a unique inside view into the growing number of international organizations and networks that have started providing aid to scientists – whether on mostly humanitarian grounds or rather driven by consideration of the impact that science can have on humanity. 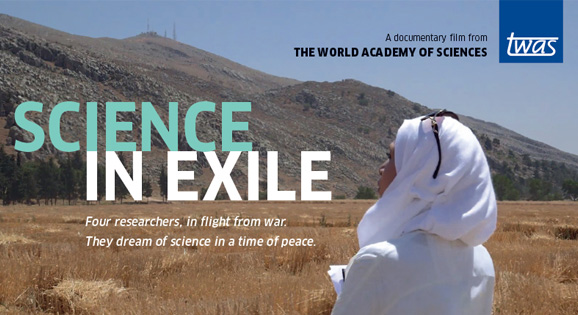